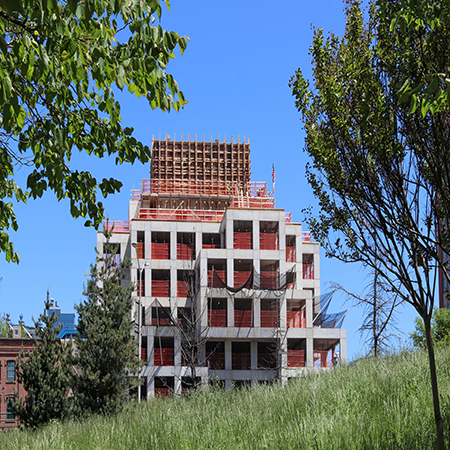 A striking 10-story residential building—one of many currently under construction in the neighborhood—has topped out in Dumbo.

It’s located at 80 Adams Street (property records also note the address 74 Adams Street, and the building’s teaser site says the name is 98 Front, another address listed in records). ODA is behind the design of the building, which bears the firm’s familiar jagged, boxy structure, and stretches for almost the entire block.The windows are starting to go in, and have reached as high as the fourth floor, mostly on the side of the building that faces Adams Street. Rather than being covered with another material, the concrete structure will serve as the exterior of the building, which closely resembles its rendering.

When the building is completed, there will be 165 condo units in total. According to permits, there will be a pool and residential lounge in the cellar, a community center on the ground floor, and parking that can accommodate 65 vehicles. On top, there will be a roof deck.

Interiors will be modern and minimalist in style, with high ceilings, says the teaser site. The lot was formerly owned by the Jehovah’s Witnesses, and for years was occupied by a one-story garage, which was demolished at the beginning of 2018.This is one of the many properties they owned in the area. In 2011, the Witnesses started putting their considerable Brooklyn holdings up for sale, estimated to be worth well over $1 billion, in preparation for a move upstate to Warwick, N.Y.

The site was purchased by Jeffrey Gershon of Hope Street Capital for $60 million in November 2017. New building permits were filed the same month.