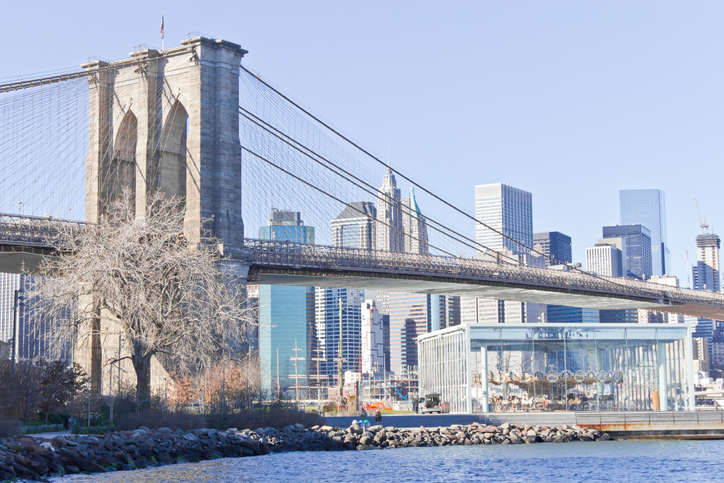 Before it was known as “Dumbo,” decades and decades before it became one of the most desirable and thriving neighborhoods in the country, the coastal area beneath the Manhattan Bridge was known as “Fulton Landing,” “Olympia,” and “Gairville.” Named “Dumbo” (down under the Manhattan Bridge overpass) in the 70s by artists who took up residence in the large lofts previously occupied by manufacturing companies, the name was never meant to stick. But stick it did. The coastal enclave is a popular destination year-round—it’s one of the best neighborhoods in the city to explore on foot—and fortunate residents of the Dumbo condos at 98 Front will find themselves just a short walk from some NYC icons that are best explored in the cold weather. So, as the holiday season gets into full swing, and many of us prime for visitors, we’d like to explore some of our favorite Dumbo destinations for winter.

Jane’s Carousel is approaching its 100th birthday in just a few years. The stunning carved carousel (with 48 horses) was purchased by auction in 1984 and moved, piece by piece, to Brooklyn from its original home in Youngstown, Ohio. However, it wasn’t until 2011 that it was moved to its current location at Brooklyn Bridge Park in Dumbo. The carousel is open year-round, with a shimmering glass cube surrounding it. It’s quite a sight, sitting there only steps from the coast and bordered by the Manhattan skyline beyond the water. Kids will love the carousel ride, and adults will be enamored by the views and impressed by the meticulous craftsmanship of the carousel.

Yes, walking the Brooklyn Bridge is a bit touristy, but it’s also something that every New Yorker should do at least once. And it tends to be much less crowded in the winter months, so visitors can spread out and enjoy the truly breathtaking views of the skyline and experience the grandeur of the bridge itself. Built in 1883, the granite, neo-Gothic stunner was the world’s first steel-wire suspension bridge. Its ionic arches are far more impressive in person. The pedestrian walkway is still covered in wood slats, too, which helps preserve the historical feel of the bridge. So, bundle up and take a stroll across to Manhattan.

Most New Yorkers know Brooklyn Bridge Park is a premier destination in the warmer months, but it’s a great place to visit in the winter as well. Just as with the Brooklyn Bridge, the park isn’t nearly as crowded at this time of year, so you can take a quiet, reflective stroll as the spectacular skyline and the Statue of Liberty provide the backdrop. The barbeque grills that are tough to nab in the summer are still available in the winter, so lunch down by the water is an option. There are even some great hills at Pier 1 for sleigh riding if the opportunity arises.