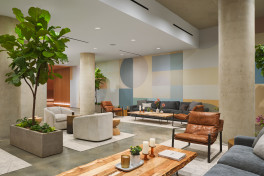 The move toward incorporating more outdoor spaces in luxury buildings was underway before the pandemic struck. But life in lockdown has made it a necessity.

“Five or six years ago, I said that living life in New York without outdoor space would not be considered luxury anymore, which was quite controversial at the time,” said Eran Chen, the founding principal of ODA, an architecture firm known for designing condominiums that incorporate green space in imaginative ways.

“I actually believe, even more today, that there’s going to be a major shift in what’s considered luxury,” he added, “and that buying any luxury real estate in New York without outdoor space will be considered unacceptable.”

As parks like the High Line, Brooklyn Bridge Park and Little Island add green space to the city’s public realm, developers are working in a similar vein in private, moving beyond the occasional roof deck or penthouse terrace to install community gardens and plantings that weave from the street to the roof. And those who had the foresight to begin before the pandemic are reaping the rewards.

From July 1, 2020, through the end of June 2021, sales of new-development units with a private terrace increased by 42.3 percent across the city, and sales of units with a balcony increased about 40 percent, compared with two years earlier, before the pandemic, according to the real estate data firm Marketproof. Sales in buildings with a communal roof deck also increased nearly 19 percent.

“It turns out that urban living is still what people want,” said Kael Goodman, the chief executive of Marketproof. “But the question is: How do people want their spaces to look, and what amenities do they want in their building? That’s changed somewhat.”

In the current market, “some buildings are just lucky,” Mr. Goodman continued. “They built buildings that have larger outdoor spaces — private spaces and shared spaces — and that is working to their advantage.”

Marketproof’s data dovetails with what Kirsten Jordan, an agent with Douglas Elliman, is seeing on the ground. Recently, she said, she has been working with more buyers who consider a private outdoor space essential.

“People used to look at those spaces, and say, ‘Oh, yeah, this is really nice, but do you really use it?’” she said. Now that’s no longer a question.

One of her clients is Kristen Barr, who is hunting for a one-bedroom in a new building, as she and her husband look to relocate from San Francisco.

“I’m really hoping to find something with some outdoor space. It’s close to a nonnegotiable,” said Ms. Barr, 40, who has struggled to find an acceptable home. “At a minimum, I need a rooftop or something shared, if I can’t have my own outdoor space.”

Even once concerns about Covid begin to wane, many in the real estate industry expect the emphasis on outdoor space to remain, as buyers recalibrate how they want to live.

“Just for quality of life, having outdoor space is really nice, and I think people are realizing that, now that we’ve all been spending more time at home,” said Whitney Kraus, the chief architecture and design officer at Brown Harris Stevens Development Marketing. “We have definitely been having strategic conversations with developers about attaching private outdoor space to more units. Our goal is to try to get projects we’re working on, going forward, to have 50 percent of units with private outdoor space.”

So what do buyers have to look forward to?

At 450 Warren Street, a five-story, 18-unit condo under construction in Brooklyn, every unit has at least two balconies or terraces. To get to their apartments in one of three structures, connected by footbridges and courtyards, residents will walk through open-air passages enclosed by metal mesh, rather than using interior hallways.

“We pushed for this idea of making the journey between the street and your front door one that is pleasant, joyous and open, where you have visual experiences and maybe see your neighbors,” said Florian Idenburg, a principal at SO-IL, the architecture firm that designed the project for the developer Tankhouse.

Tankhouse began selling units in August, with two-bedroom apartments starting at $1.675 million, and is planning two larger condos with SO-IL, based on similar principles, at 219 Jay Street and 134 Vanderbilt Avenue.

At 98 Front Street in Brooklyn, Mr. Chen’s firm used a series of cantilevers on the facade, pulling some units forward and pushing others back, to create more terraces. And three ground-floor units in the building have backyards with a separate indoor space entered from the garden — an appealing feature for those working from home.

At Flatiron House, at 39 West 23rd Street, CookFox Architects is designing a 44-unit, terra-cotta-and-glass condo for the developer Anbau that will sprout with greenery from a series of irrigated loggias extending up the facades — planted with lowbush blueberry, alpine strawberry, thyme, oregano and lavender — with perforated railings that serve as trellises. The developer anticipates beginning sales later this month, with units priced from $1.85 to more than $18 million.

“People feel better when they’re connected to nature,” said Rick Cook, a founding principal of CookFox, who collaborated with the landscape architecture firm Future Green Studio. “We’ve been working the puzzle of depth of facade, and working in planted loggias and Juliet balconies, and every other deep-facade design trick we could come up with, to connect people with nature.”

At 58 Saint Marks Place in Brooklyn, Avdoo & Partners Development is at work on a 100-unit condo designed by INC Architecture & Design, where nearly 80 percent of apartments will have private outdoor space and lush gardens will be woven into the communal spaces. Designed with the landscape architecture firm Terrain, the green spaces will include a viewing garden of wildflowers, grasses and trees stretching almost 300 feet along the second floor; a private courtyard garden with 55 species of plants and trees; and a landscaped rooftop with an outdoor cinema and grilling area.

After eight months of sales, about 60 percent of the units are in contract, said Shlomi Avdoo, the founder of Avdoo & Partners.

Dorin Baul, 34, a partner at HWKN Architecture, and Kaitlyn Thornton, 35, a studio director at the design firm Yabu Pushelberg, are among the buyers. The couple looked at a handful of new developments in Brooklyn before settling on a two-bedroom unit at 58 Saint Marks Place, with a small private terrace and views of the wildflower garden, for about $1.3 million.

“With a lot of developments, you get the feeling that there are, like, two pools on the roof, wine bars and all of these amenities that you’re going to pay for but never use,” Mr. Baul said.

But the amenities and landscaped spaces in their new building, Ms. Thornton said, “don’t feel like an afterthought, or trite. It’s not like they said, ‘Oh, we need a garden, so let’s just slap a garden in here.’ It really feels thoughtfully integrated into the larger mission of the building.”

RockFarmer Properties put a similar emphasis on weaving landscaping into the heart of its new building, the Rowan, a 46-unit condo at 21-21 31st Street in Astoria, Queens, designed by the architecture firm DXA Studio, with the horticultural designer Patrick Cullina. There, residents returning home will pass through a street-side garden to a green-roofed, glass-walled lobby with a private courtyard garden. About half of the apartments have private outdoor space, and about half of those outdoor spaces are sizable, said John Petras, a founder of RockFarmer Properties — “anywhere from 500 to, in some cases, 1,500 square feet.”

When the pandemic stuck soon after sales started last year, the developers worried. “But after about a month, I was just shocked,” Mr. Petras said. “We were selling units every week.” He attributed the activity to the project’s focus on outdoor space and nature, as well as its location and the company’s early adoption of virtual showings.

“Last July, in the middle of all this, we actually raised prices on about 15 of our units,” Mr. Petras said, while other developers were offering discounts.

He is now in the early stages of planning the Rowan’s second phase, which will involve a larger building with more units, and he is contemplating a few strategic changes.

All of that will cost more, he said, but he is certain the investment will pay off: “Any type of outdoor space, even if it’s a small little terrace, is more important today than it was 18 months ago.”